I knew since Jonah was born that I wanted to have the boys 1st and 5th Birthday together. They are about 6 weeks apart so not super close but close enough for me to justify it. Each boy still has their own special day on their actual birthday but their party is for all of our friends and family to come together and just have fun!

Our thought for the theme was to pick something that Jaidan wanted and incorporate the baby into it. Luckily Jaidan LOVES racing and Jonah loves cars (and pretty much anything his bubba loves) so the racing theme was easy to decide on!

When the guests arrived they found their VIP driver’s license with their name and picture on it & then picked out a brand new hot wheels car. They raced it on the wooden track Jared built for the party. Jaidan spends hours racing his cars down the ramp in his room so we knew he would love to do this with his friends too. 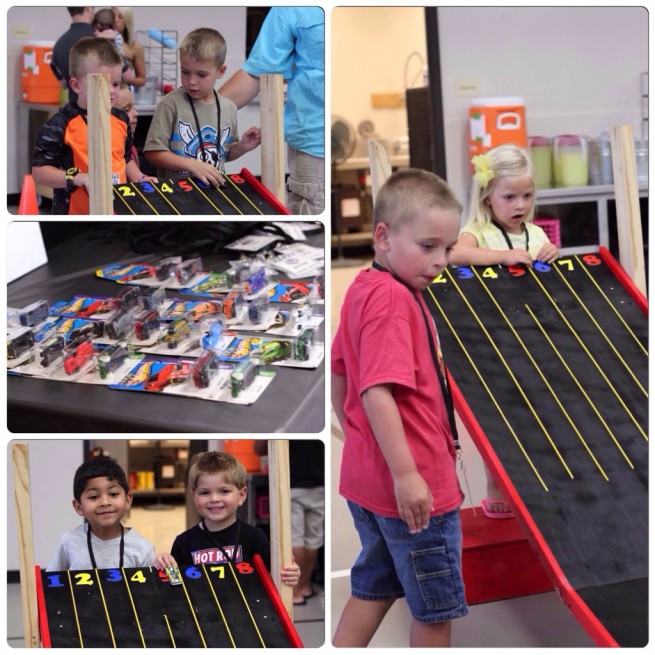 The food was ready thanks a ton to my mom and I think my sister was helping too. We had Risckys BBQ sandwiches, potato salad, fresh green beans, pop chips, and fruit. I didn’t get a picture of the food though. Actually, I didn’t get pictures of a lot of things I had wanted to because throwing parties is BUSY and it can get chaotic. 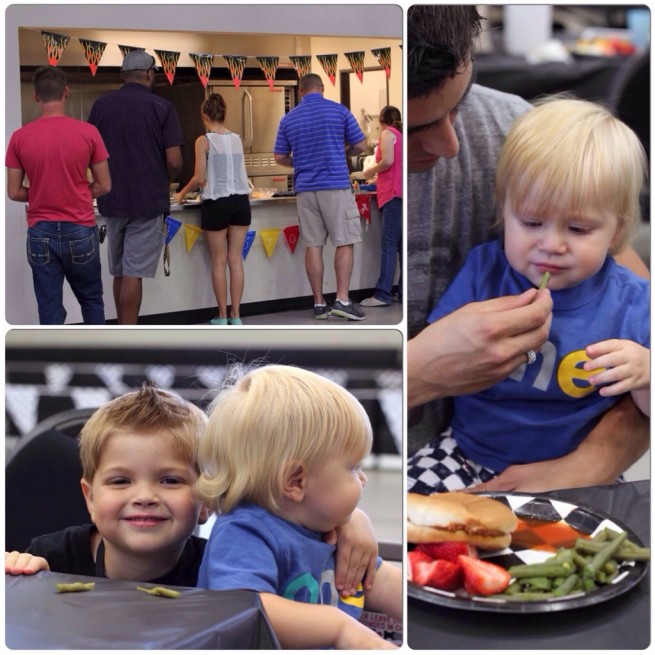 After we ate I got all the kids together to take a picture. (before I forgot) For Jonah and his friends that was pretty challenging because those were some <cute!> busy kids!! 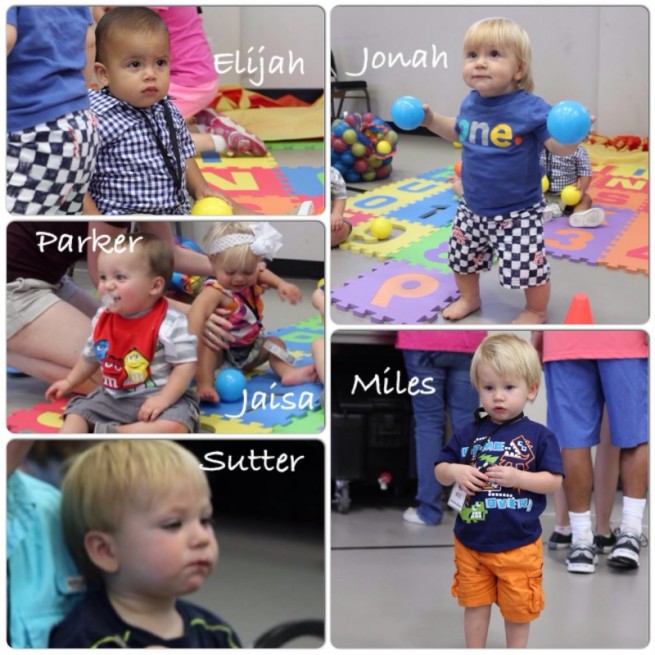 Jaidan’s friends were a bit easier to get together… 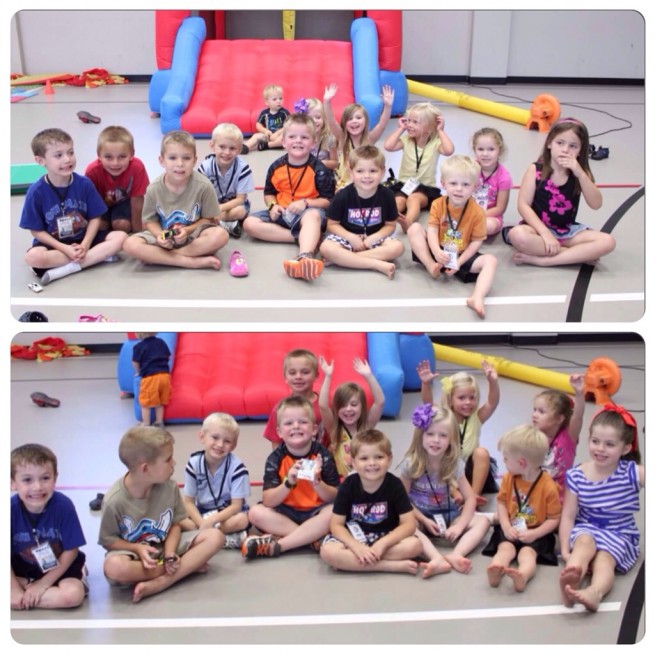 Next up was time for the Box Car Races. Jaidan figured out he didn’t run as fast in a box so he was not a fan of that. lol. 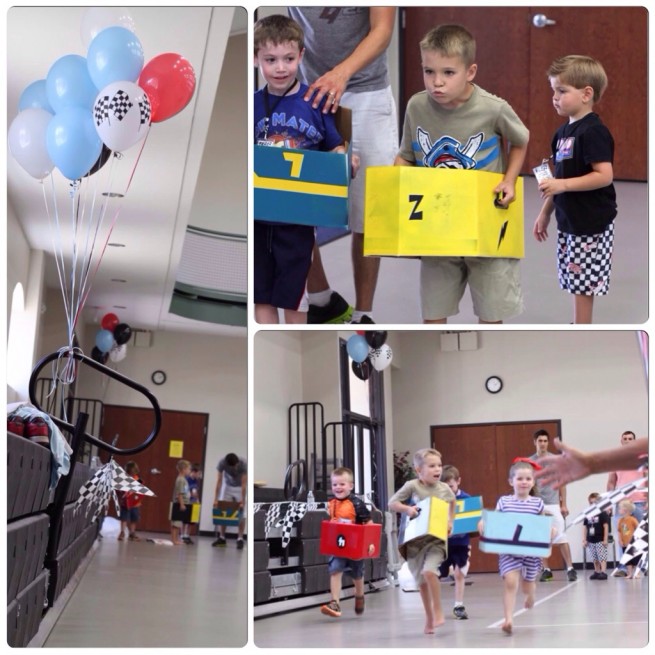 After the box car races it was time to go sit in the race car. Johnny was so awesome and brought his race car up to the party so I took pics of all the kids trying it out. Joel also had his dads red car. And of course the pictures I got of both my boys was blurry. It’s hard to see the small screen, especially when I can’t see well anyway. boo. 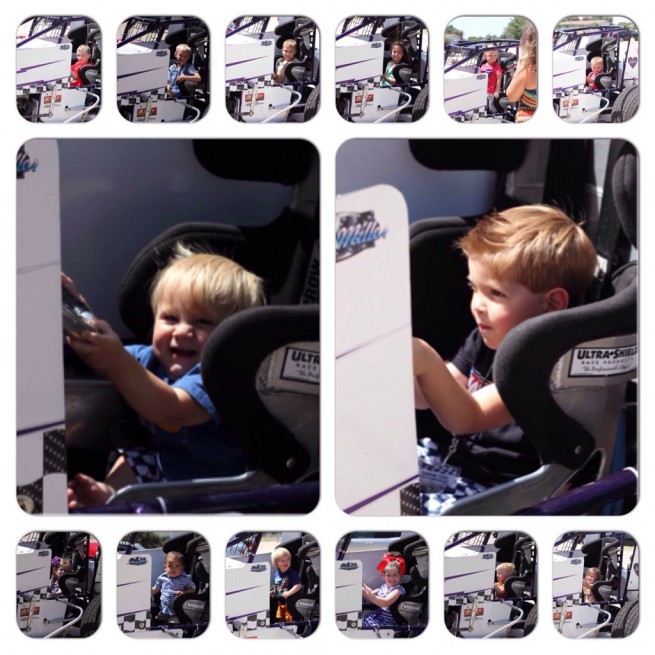 It’s not a Latigo Birthday Party without the SLIDESHOW of course! It takes me forever to make them (like hours upon hours) but I really love having one slideshow of the whole year. I pick out my favorite pictures or videos. This year was mostly videos because we’ve been recording a lot more. If you get a chance come back and watch them. 🙂 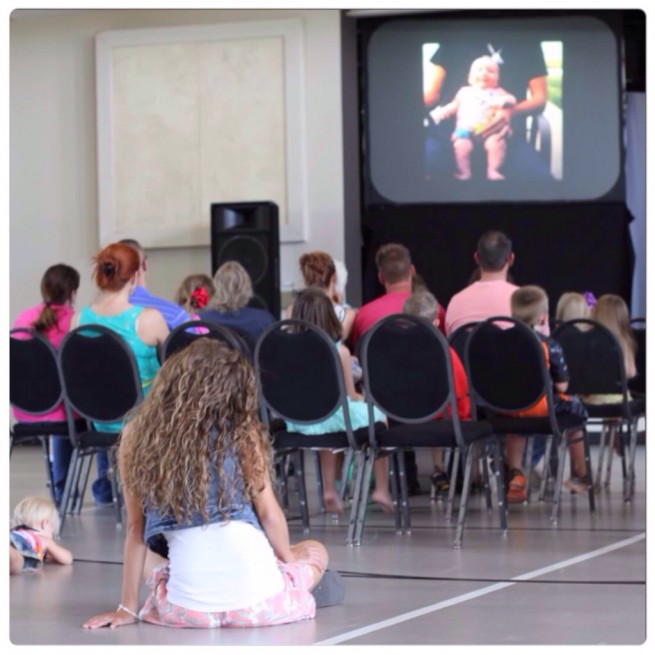 One of my FAVORITE decorations for the party is this dessert stand Johnny made for us! That’s his racing tire on the bottom and then he made the platforms with the stop light in the middle. The bottom and middle rows had the most delicious cupcakes that my friend made for the party. The top row had ‘flame’ cake balls! They were strawberry and lemon. 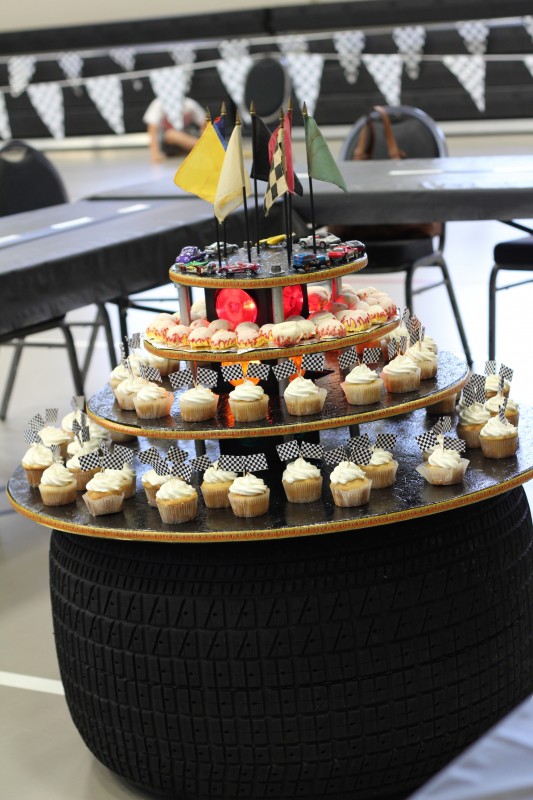 I’m just so impressed with how awesome it turned out! 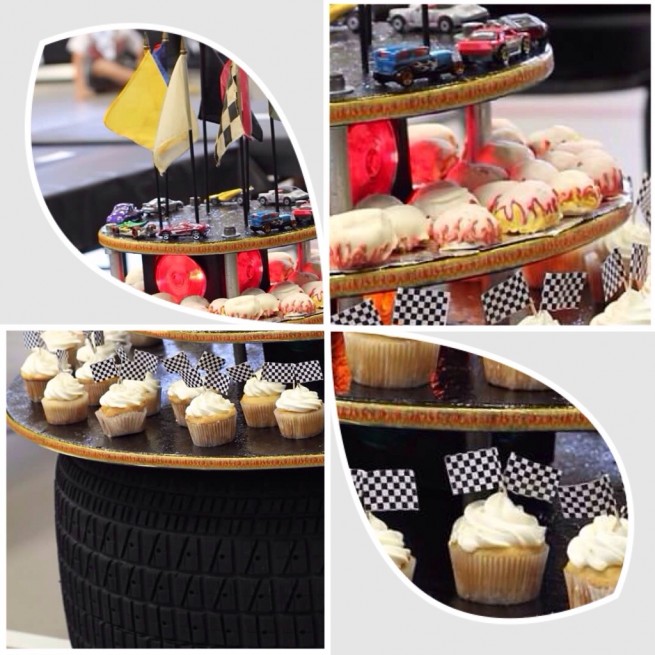 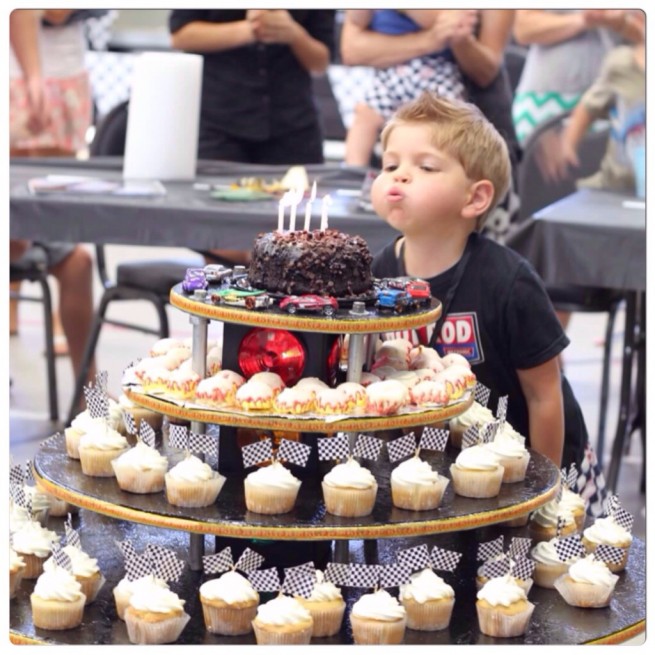 Jonah was LOVING his watermelon ‘cake’. He was so cute. Jaidan came over and just took a bite out of it so Jonah copied him. It was the cutest thing ever. And I wasn’t concerned about him eating too much of it. 🙂 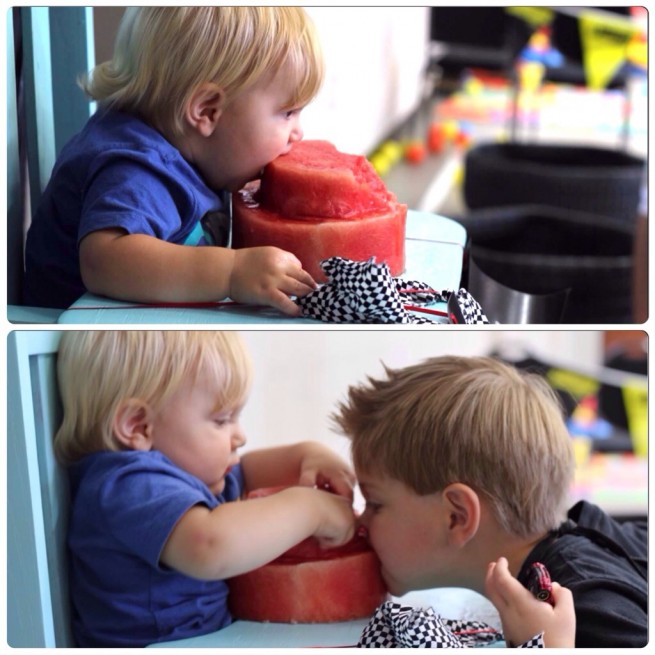 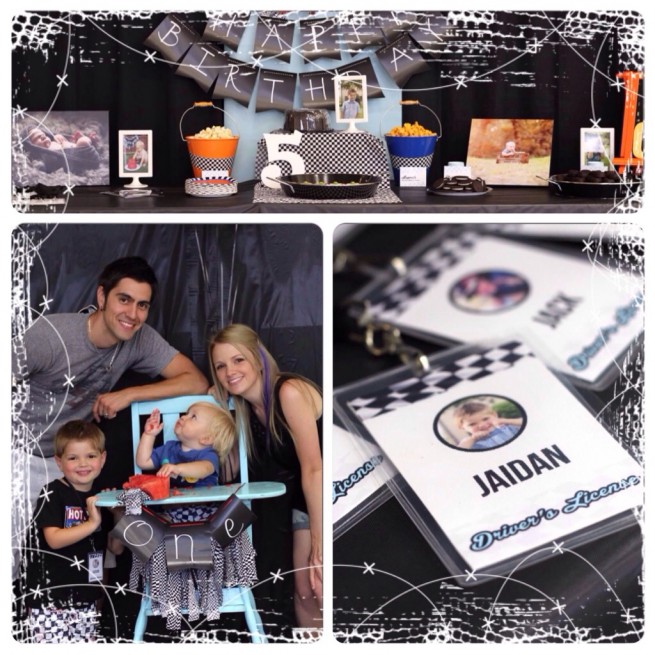 Here’s some of our sweet treats we had. Traffic light rice krispy treats, oreo flat tires, and I didn’t get a close up off the ‘tires’ but my mom and Jared made 3 batches of black bean avocado brownie donuts. You can see them below in the black pan next to the ONE sign. We also had some savory treats of loaded baked potato popcorn and jalapeno cheddar. 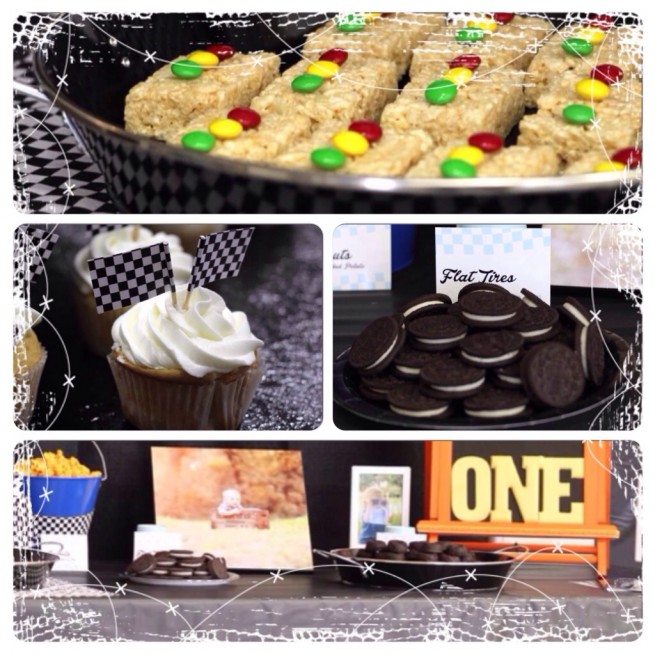 It’s finally time for PRESENTS and the boys were so blessed with all the generous gifts! 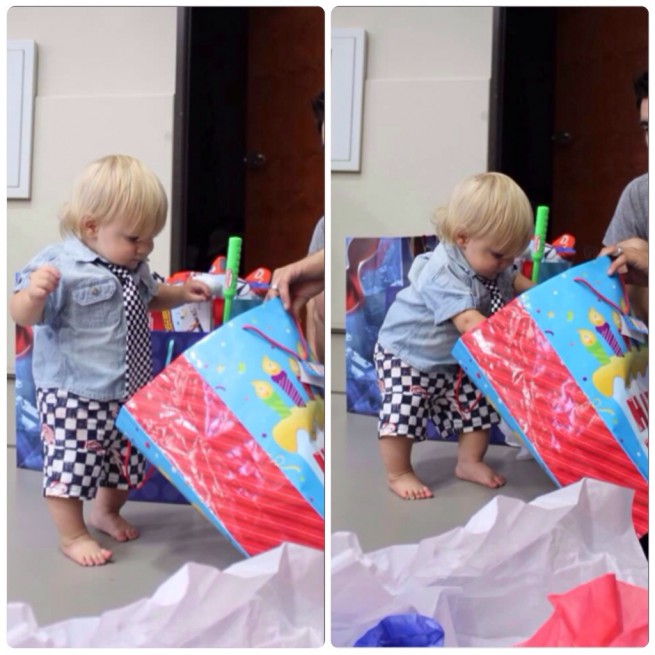 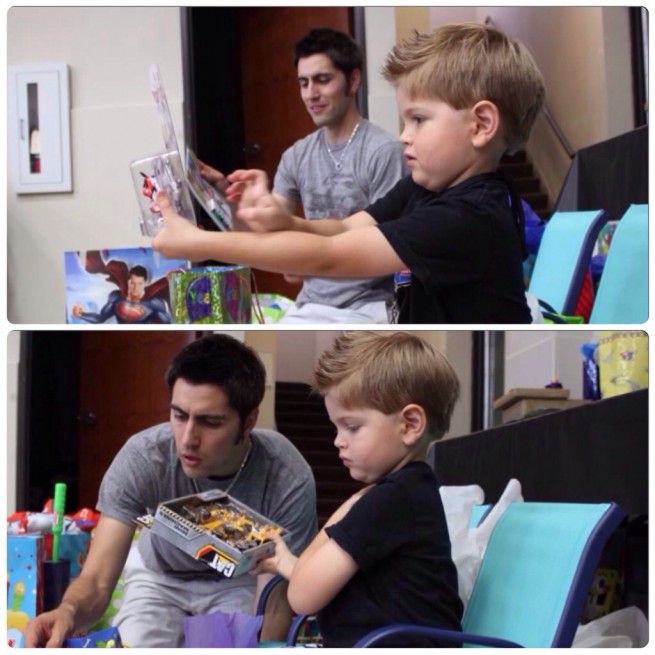 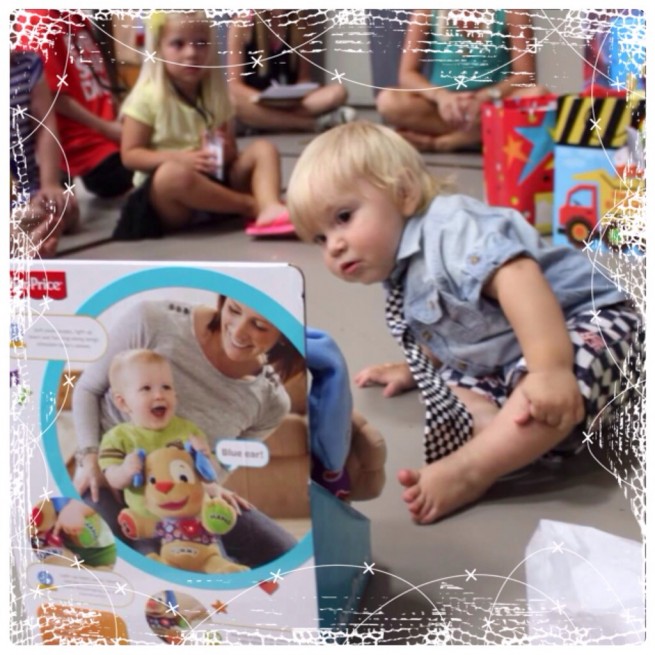 And of course I didn’t snap a picture of the party favors but it was CARS cups with cars stickers and a small pkg of Cheddar Bunnies. They also got to keep their car they picked out at the start of the party and their lanyards. The little ones got the same cup with a checkered mesh water ball.

Share
All About Jaidan  / All About Jonah  / Birthday Party