One of the downfalls of finding out so early is that you find out so early!!! I found out at 3 weeks and 3 days. Crazy early & with my last pregnancy I miscarried at like 4 weeks and 5 days or something. Once again I had to go back to that trusting thing again where I just trusted God’s plan for my life and not let doubt get in my way.

I’ve basically had no real symptoms. I’ve only had waves of small random things. With Jaidan I was sick within the first week of finding out. Like super sick for 6 weeks. I know I’m going to compare this pregnancy with Jaidan’s just because it’s the only thing I know! So bare with the comparison 😛 It makes me nervous to have only small symptoms but I’m also thankful that I don’t have to divulge my news right away. I can keep it under wraps at least for the time being.

I’m still testing like every other day & it still says I’m pregnant so even though I hardly feel like it, I guess I’m still pregnant!! 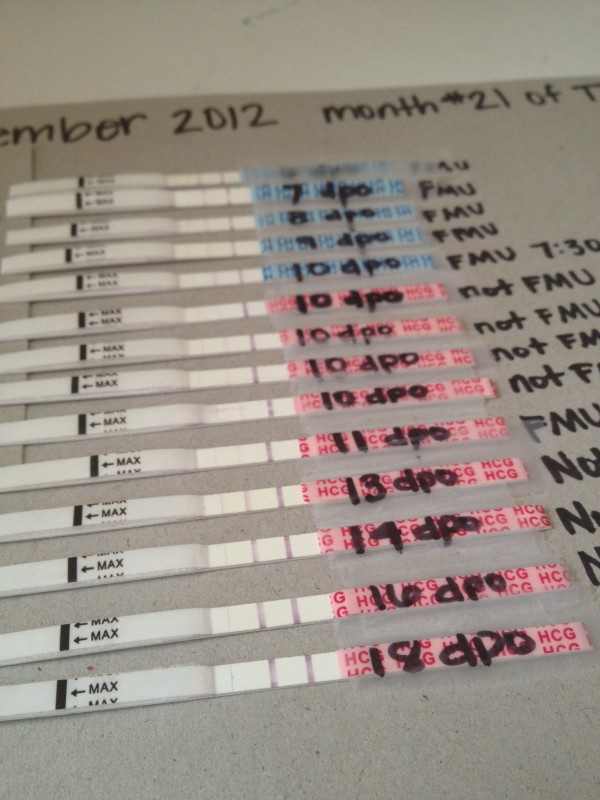 We had our first ultrasound & saw & heard the heart beat! It was 118bpm. The baby looked like just a tiny shrimp but it was there! 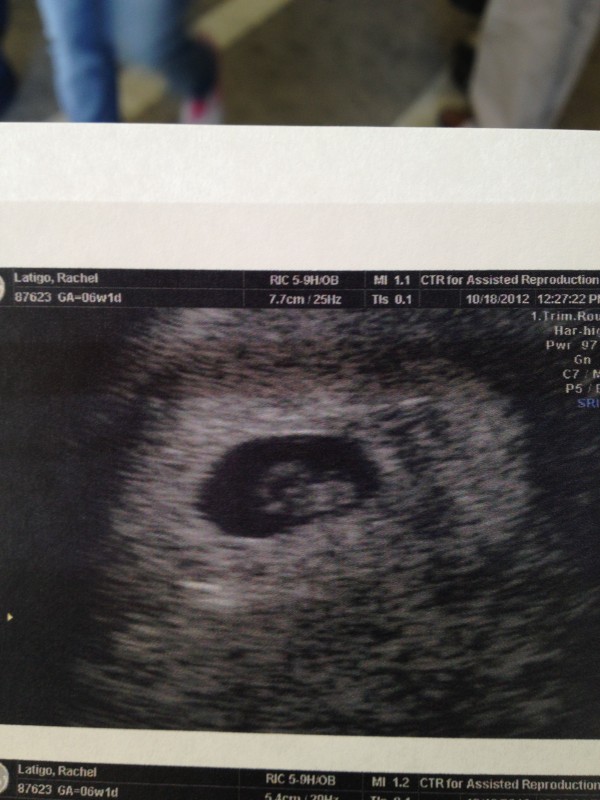 I told my mom & family this week at our annual family photo shoot! I am having waves of slight nausea but overall still feeling great.

My first throw up and REALLY not feeling so great. 🙁 I seem to get really bad indigestion while I’m pregnant too. I’ve had it this whole time so far & found out that ROLAIDS no longer exist because of a recall at the end of 2010 and their soft chews are the ONLY thing that worked for me!! I did find some Walgreens brand antacid soft chews and they are better than nothing but are not magic like rolaids. We got another sonogram this week too! 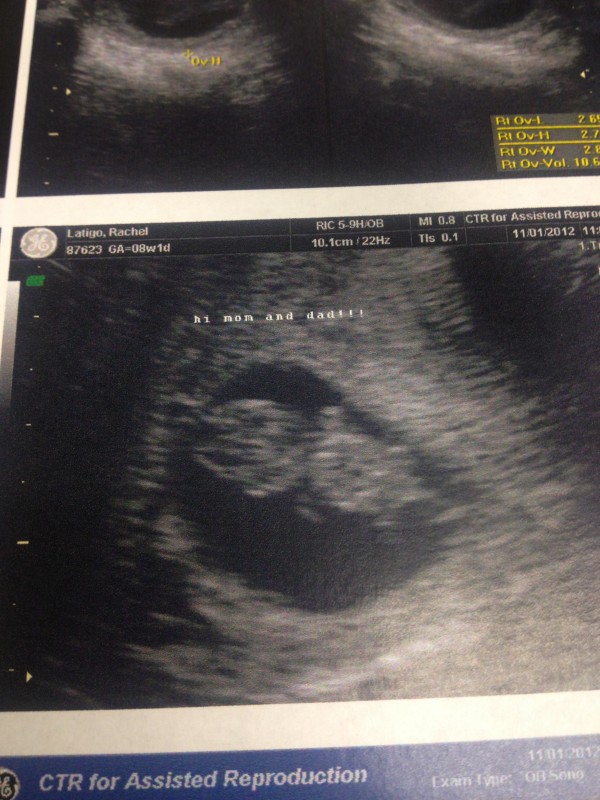 The heart beat was 185bpm & it looked more like a gummy bear. The baby was kinda being a wiggle worm too. Already! It was SO stinkin cute! And this is the week I start my belly pictures so here it goes… 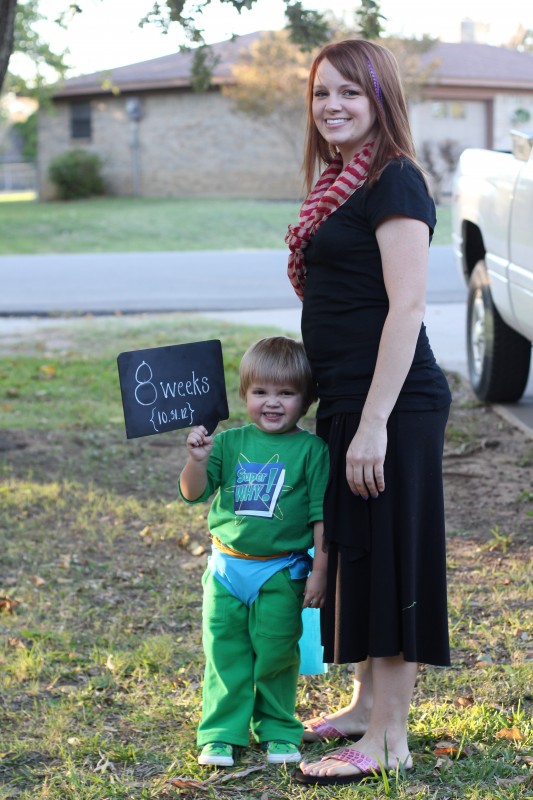 I’ve been super yuck feeling!! I’ve only thrown up two mornings but it’s usually the all day sickness where I just feel yuck enough to not be able to function. The Dr. gave me zofran so I’ve been taking it. Some days it helps but others not. Here’s the belly picture… We took a couple pictures with Jaidan behind me and it looked funny because my butt looked huge in his face and while I was looking at the pictures on the camera Jaidan was wiping away my pretty chalk writing… at least you can still kinda see it says 9 weeks. I kinda like it though… because that’s so our life with him! lol. Little stinker. 🙂 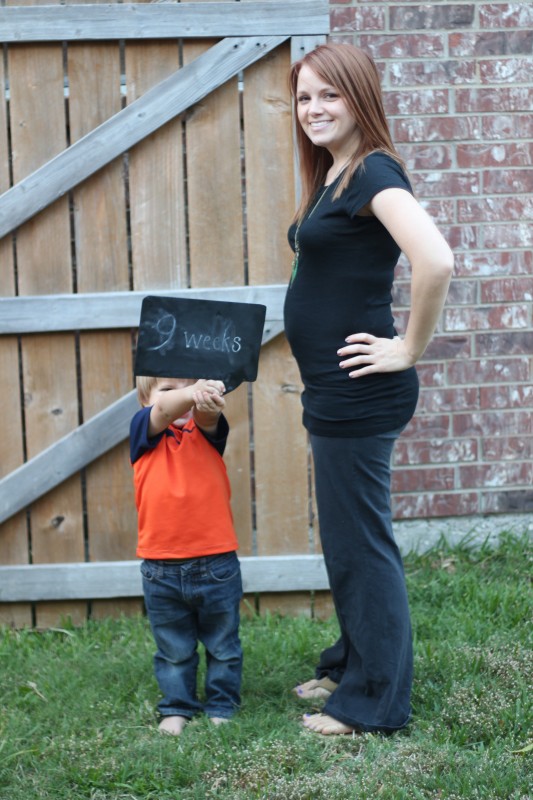 Holy moly sickness. I didn’t even get a picture. 🙁

I hope the sickness ends soon. I want to cry. And I have.

I’ve had a couple good days this week so hopefully the sick part is on it’s way out. Food doesn’t taste good. Actually the thought of food makes me gag so poor Jared has been planning & cooking dinner. I’ve really only wanted to eat bad stuff too, like macaroni & cheese, mashed potatoes, pizza…. umm yeah. Vegetables make me sick, meat makes me sick, fruit even makes me sick and I love fruit!!! 🙁 With Jaidan I craved raw vegetables & salads so I feel like such a failure this time around. :/I hate eating so unhealthy.

Jaidan doesn’t REALLY understand the whole baby thing yet. I’ve had to mention in the mornings that the baby makes my tummy hurt so I can’t move very much and one time he lifted up my shirt ‘took the baby out’ and lifted his shirt and ‘put the baby in’ & said he would carry it for me so my tummy would feel better. My first thought was ooohhh you are so super sweet and my next thought was does he think I’m pretending about a baby being in my belly? lol

I’m not sure how some people are able to wait until 12 weeks to announce their pregnancy. Clearly this couldn’t wait… 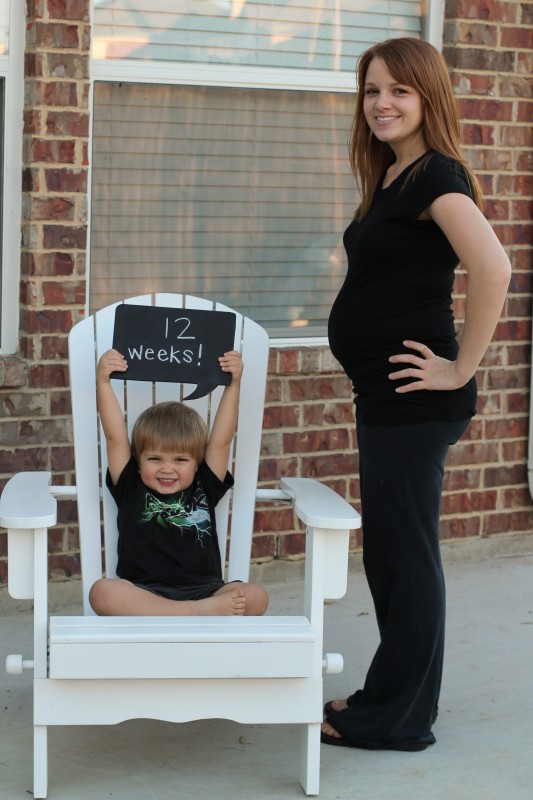 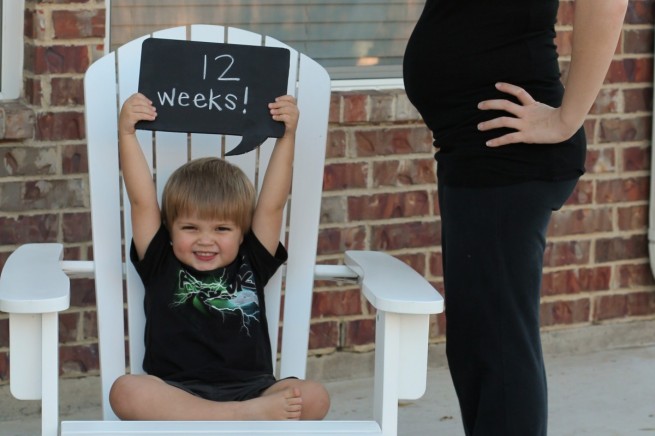 I managed to slip by the first trimester in one post. Awesome. Here’s to no nausea, no vomiting, & weight gain in all the right places for the 2nd trimester. 🙂